An introduction by Al Gove

In 2004 George, age 16, asked me if I could support him through school, because he had lost both parents and older brother recently to death. When asking the Lord, He said, “Yes”. I have been supporting him every month since. When he graduated from high school in 2010, I asked him to do a YWAM Disciple Training School in Kigali, Rwanda. It changed his life. He heard the Lord calling him to street kids and orphans and knew the ministry name: Sower’s Kids.

In October 2011 Norma and I went to see George and help him connect with other ministries I knew of. George and “Mum” hit it off right away. We truly consider him as one of our adopted sons. It was so great to see the anointing on his life and see even the widows wanting to be under his calling. When we were there he shared a sketch, dated Aug. 10, 2010 from his DTS class, showing the vision he had for his life. Picture George like the Pied Piper walking down the road with kids on his shoulders, a large group of kids behind him and one on each hand, all walking into a compound with housing, school, and a church in it.

George found some land and asked us to help purchase it. Norma had just received an inheritance from her father’s death, and wanted to invest into George’s calling. It is 80 by 80 meters in size (260 ft x 260 ft). He sent a sketch of a 2 story building he wanted to build, but we don’t have $150,000 and we have been waiting on the Lord for the next step about a year now. At 2 am on September 26th I was awakened and this idea came to me for George. I got so excited, I couldn’t go back to sleep. When I was in Zambia in 2006, I saw cement block making businesses on the side of the road, one after another. The thought came to me to make a simple 2 at a time cement block making machine, that makes them right on the slab, like a hen laying her eggs. George can make 500 blocks a day. (You can see the machine run on You-Tube “QMR2-45 egg laying block making machine”.) 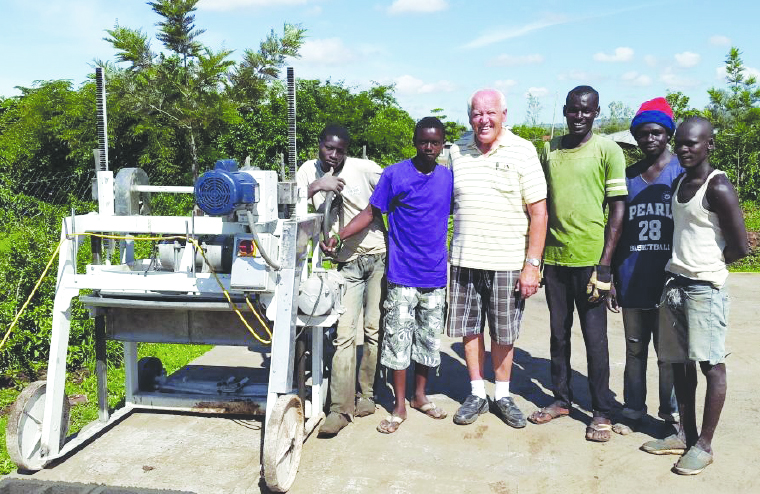 In early 2015, Gleanings’ 2014/2015 Discipleship Training School traveled to Kenya for their two-month outreach. One of the many ministries they worked with was Sower’s Kids. The aforementioned block-making machine was transported by shipping container with other supplies and food. After the DTS left Kenya, Al remained behind to work on construction with George.

How to partner with Sower’s Kids

A “Sower’s Kids” account has been set up at Gleanings so the money can be transferred every month with one transfer fee, and for those who desire a donation receipt. You can donate online here or send a check to the address below.