A God Incidence | Mission of Grace 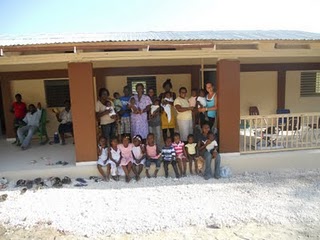 After breakfast one morning, Fritz, one of the directors here at Gleanings for the Hungry, shared about his recent mission trip to Haiti where he went with a team from Gleanings to help people in the recovering country. The slide show began with pictures of individuals giving out dried peaches and soup to hungry people, then it progressed to tell a deeper of story of circumstances aligning and an amazing accomplishment coming together.

The story started to unravel with a picture of a resort by the water coming up on the screen, after seeing many pictures of the hungry being fed, this one seemed kind of odd. But it turned out that there was a woman who worked there that really had a heart for the kids and the team prayed with her about this woman’s longing to do something for the local kids.
A week later, when the team came back, she had hired a nanny and brought in 6 kids. The neat thing about this is that the team had been thinking about building a house for Rick’s daughter Kim, who is a missionary there that watches over children. In introducing Kim to this woman, a greater purpose for the house was now set…to open an orphanage where Kim could share the responsibility of watching over orphaned children with this local woman.

Donations came in for the house and local people helped build the house and it came together in a couple months. “It was really incredible,” Andria Merrill said, who went on the mission trip early 2011.

Now the orphanage houses and acts as a safe place for many desolate children in Haiti.